You are here: Home / Archives for pro-life 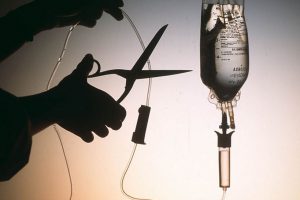 Who shall guard the guardians?

Voluntary euthanasia is now legal in California. It comes in two forms: intentional denial of all food and fluids, this was legally established as permissible against NON-terminal patients in the Elizabeth Bouvia case. In this case a clearly non-terminal, quadriplegic woman sought to have a hospital facilitate her death via dehydration. The patient later changed her mind, BUT the law didn’t. Elizabeth’s change in heart is the most compelling evidence that her desire for suicide was emotional in nature; but no matter. The legal precedent is now established case law. Voluntary, medically-supervised euthanasia has been authorized and is silently practiced in many California Medical facilities today.

The second form of voluntary euthanasia now legally practiced in California is that popularized by Jack Kevorkian. It is the direct, intentional, and assertive use of medicine in a lethal action against a patient’s life. The slow death of dehydration that was intended for Elizabeth Bouvia is thus avoided. The goal in “physician-assisted suicide” is to immediately kill a patient. The recent law legalizing physician-assisted suicide and justifying the lethal use of ‘medicine’ is employed, “Because they were asking for it.”

Doctor Pan’s SB 481 is facilitating the ongoing cover up of nursing home abuse and further loss of protections for the medically vulnerable. As in other jurisdictions where intentional medical killing is practiced, ‘guardians’ feel free to use their role to cease a patient’s existence, without that patient’s consent, and without any other outside oversight.

But there’s more. Many medical facilities, particularly nursing homes, here in California and elsewhere, in more than just a few cases, surreptitiously have not been caring for and even not feeding patients. Historically this was called for what it is, “intentional medical neglect.” You can see numerous examples of this widespread phenomenon in these reports. http://theconsumervoice.org/uploads/files/actions-and-news-updates/Consumer_Statement_Ensuring_Nursing_Home_Safety_April2017.pdf

Our culture is quietly witnessing the institutionalized dismissal of humanity.

When confronted with these numerous incidents, the facilities often justify their actions (or inactions) on the legal concept of “substituted judgment.”

“They would have asked for this… if they could.” Substituted judgment gives authority for your decisions to someone else if your wishes are considered unknown.

California medical institutions have usually invoked a California Health and Safety code, Sec. 1418.8 which allows institutions to make medical decisions for a patient if they ‘could not find’ another responsible party to speak for the patient. Historically this law was meant to provide care for patients, but now it is usually invoked to ‘take care OF patients.’

But here’s the rub, under 1418.8 these institutions were very free to simply declare you to be incompetent and then have their way with you!

One of the more common sentiments invoked by institutions is the pop culture maxim, “I would never want to live like that.” And Substituted judgment ensures that the medically dependent person won’t.  Their lives are dismissed.

California Association for Nursing Home Reform (CANHR) brought a lawsuit in Alameda County Court against Section 1418.8 and Presiding Judge Gorillo essentially agreed with their concerns. He said the nursing homes and other hospitals were violating “a patient’s due process rights” by making such declarations of ‘incompetence’ whenever the institution so wished. Remember – ‘No one shall be deprived of Life, Liberty, or property without due process of law.’

But there is still more. The medical institutions are not happy with someone investigating their declarations of incompetence and the subsequent actions they may take. They still want be free to deny care whenever THEY decide. Remember, when invoking ‘substituted judgement’, by definition it is not the patient deciding. I have been given more than one story of a an ill or elderly patient’s request for essential sustenance being simply met with a declaration of ‘incompetence’.

The California Medical Association (which recently dropped its long-held stance against a doctor intentionally killing a patient) and the California Hospital Association 9which has a vested interest in ‘moving along’ unprofitable patients) have asked California State Senator Pan to offer a bill, SB 481 to amend the flawed Health and Safety code which had previously given them license to freely deny any care or treatment. Under Pan’s bill, when an institution declares a patient ‘incompetent’ they will simply present the patient with a note, stating ‘You are incompetent.’

Think about that for a minute. If someone is actually incompetent, they will read and understand your note? Really? No matter. The institution is now ‘free’ to do what it wants with the patient.

Senator Pan asserts that the institution simply wants to be free to ‘help the patient.’ They wish to make ‘caring medical decisions’ for the patient. But tellingly, Pan has refused amendments that would prohibit the intentional denial of food and water or the intentional ‘deleterious use of medicine.’ Most alarming is that there are already two existing state programs that are designed to intervene on behalf of medically vulnerable patients: The State Long Term Care Ombudsman program and Adult Protective Services (APS). Dr. Pan is intentionally cutting these agencies out of involvement with these freshly declared, ‘incompetent’ patients: intentionally ignoring established protections for incompetent patients is a very bad sign.

The existence of the Ombudsman and APS programs should be of only slight comfort to you. My experience has been that in the world of bureaucratic medicine, no one really wants to care for an individual that no one wants to care for.  I mean, who wants more caseload?

Doctor Pan’s SB 481 is facilitating the ongoing cover up of nursing home abuse and further loss of protections for the medically vulnerable. As in other jurisdictions where intentional medical killing is practiced, ‘guardians’ feel free to use their role to cease a patient’s existence, without that patient’s consent, and without any other outside oversight.

“The tragedy,” says Law Professor Mort Cohen, who sued the state over the ‘substituted judgment’ clause, Health and Safety 1418.8, “is that we live in a culture that doesn’t want to view care homes as actual care homes, but places to just go die.” Sadly, the medical profession now sees its role as simply ensuring those deaths.
—-